My husband got dental implants recently and I’m more than a little put off by them. He has always been a clean guy and brushes regularly, but ever since he had the work done, his breath stinks! Not even a little, I mean a lot. I don’t know how to bring it up to him, but it’s hard for me to sit next to him, let alone kiss him.

Is this something a lot of people have trouble with after and are there easy fixes for it? I don’t think he’s not brushing- he’s always been good with that, and I don’t want to hurt his feelings either, but it’s really too much. He also has a job where he works closely with the public. He is in sales and I can’t help but wonder if he’s having trouble at work because of this too. 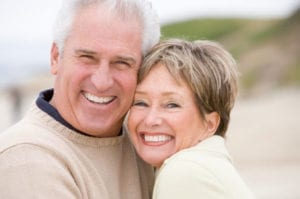 It’s good that you wrote in. This is not normal with dental implants. If you feel certain he hasn’t changed his habits, there’s a possibility he’s dealing with some kind of infection and just doesn’t realize it yet. Chances are, he’s got an awful taste in his mouth too.

It might be a good idea to start by chatting with him and asking him how he thinks it’s going. If he brings up any discomfort or a bad taste or smell, you can nudge him in the direction of the dentist and he never even has to know you noticed the issue too. It’s better to do this sooner rather than later. If it is an infection, there’s a real chance he’ll lose the dental implant. Getting on antibiotics quickly may be the thing that saves it and allows him to recover.

If he isn’t aware of any oddities, you really don’t have much of a choice but to be honest with him. However, he might take it better if you focus on the work he had done and make sure he knows you’re tying it to that and not something he has done. If his personal habits have changed or he isn’t getting in there to clean well enough, he’ll take the cue and make changes. If making changes doesn’t help or he hasn’t changed his oral care routine, he should get it checked out.