I have had porcelain veneers on my teeth for two years. I had a pretty extensive smile makeover done with a total of 14 veneers, eight on top and six on the bottom. I have always kept good care of them and overall I’ve been really happy with how they look. Somehow I ended up with a chip on one of the bottom ones in the front.

We have moved since I had them originally placed. So, I had a new dentist fix it. He shortened it using a buffing tool. He also decided to buff the one adjacent to the chipped veneer to make it blend in.

Well, it’s been about six months since that work was done to fix it. I felt like one of the veneers looked darker than the others. He told me that he didn’t see it and that it was fine. He said it was just me. Well, it has been another couple months and now I have a dark spot on the tooth and a kind of bluish hue on the tooth. The newest discoloration happened all at once, what felt like overnight. Am I at risk for losing this tooth? The last thing I want to deal with is a missing tooth out of all this. At this point, I’m not sure I really want to go back to the same dentist.

Thank you for reaching out about the problems you’re having with your porcelain veneers. First off, it is important to recognize that it is difficult to give specific recommendations when I haven’t seen you in person. However, based on what you have described we can make some assumptions and provide some guidance. 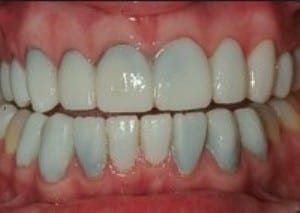 It sounds like it’s possible that the veneer is leaking. You can see an example of what a leaking porcelain veneer looks like in the photograph. This image shows a set of temporary veneers that are in the early stages of leaking. But it is a good example of the blue tinge.

The procedure to repair a leaky veneer is fairly simple and can hopefully be re-bonded. You didn’t state specifically where the dark spot is coming through. It is likely that it is occurring where it is bonded directly to the tooth. Many times it is the bond that is failing and the substances leak underneath the porcelain veneer. If this is indeed what it happening with your case, then it can be fixed by simply re-bonding the same porcelain veneer. It is uncertain whether the bond was compromised when the veneer was shortened. It may have actually been from the initial bond by the original dentist who placed them in the first place. A porcelain veneer usually has a very strong bond that shouldn’t be adversely affected from the alteration the new dentist made to shorten it.

Now, if much more time passes than the veneer is at risk for falling off. Depending on how it comes off, if it breaks or falls off in once piece, it may not be able to be re-bonded. So it would be wise to get this taken care of sooner than later.

It is understandable if you are doubting the dentist who shortened the veneer. His unwillingness to help you out based on his response when you went in because you thought it was discolored, is not a good sign. If you are still feeling unsure about the dentist, always listen to your gut. It may be in your best interest to find a different cosmetic dentist in your area.

It is always best to work with a dentist who you can trust. So, start with the dentist you have been working with to see if he will address your concerns. But be prepared it may be time to move on.

Thank you for reaching out. Hopefully, this information will be helpful to you.