I have had so many issues since I got porcelain veneers done about a year ago. I had some minor chips on some of them, and one of my two front teeth was longer than the other one. Also, my teeth were becoming pretty discolored. Since I had the work done, I have had trouble ever since.

When I first went in, the dentist ground my front eight teeth down to little stubs. He put temporaries on until the permanent veneers were ready.

It feels like nearly every single week since they were cemented in place, one has popped off. I call in, and they re-cement them back in place. From the beginning, the dentist knew that I grind my teeth. So, I’ve been wearing a night guard to help with that. The dentist knew about the grinding but I feel like he is blaming me for them coming off and tells me that is why it’s happening. It seems like the ones that come off more frequently have a little ledge on the back. I’m not sure if that has something to do with it. But, whatever the case, I feel like blaming me for them coming off isn’t fair.

I’m getting so used to the routine, I can tell when one is getting ready to come off. My breath starts to stink terribly and then what do you know – it pops off shortly after that. I had to attend a wedding with three missing teeth. I looked hideous and am so embarrassed. Then, recently I went on vacation and had to travel with glue just in case one came off. This whole situation doesn’t feel right.

I just got a call that he wants to try something different to see if it will help. At this point, I’m beginning to think he is experimenting on me. I’m so over this whole experience. I was originally told that they would last for 20 years. Does that mean I have to keep dealing with this for 20 more years? Little stubs are simply not acceptable.

Even yesterday I had two of them come off while I was eating a banana. I’m so stressed out, have spent way too much money and I literally feel helpless. I cry when I look in the mirror and it’s literally keeping me up at night.

I need to know if there is any hope? Will I end up ruining my teeth and be left with dentures as my only option? I am getting ready to move in a month and I’m scared to even begin with a new dentist at this point. I can’t afford to keep paying for treatments that do not work.

Another thing worth mentioning is that he has me take medication called Ativan the night before an appointment. Then, I’m supposed to take another one right before it. Then, I bring in the other pills which are given during the appointment, along with nitrous oxide. I don’t remember anything about what happens during these appointments. Then, I’m so out of it for the day after the medication. Is this normal? Or have I entered the twilight zone.

To be as blunt as possible, no – this is not normal. There are so many things that have gone wrong for you in what should have been a time where you should be enjoying your beautiful new smile. On behalf of reputable cosmetic dentists, I apologize for what you have experienced. To be honest, it sounds like you may have a malpractice suit on your hands. 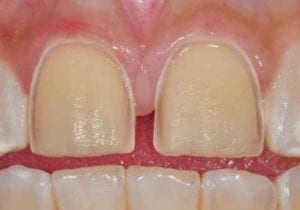 Porcelain veneers require a tiny portion on the front of the tooth to be prepared. The amount of tooth that is removed is typically less than the thickness of a fingernail. You can see an example of how a tooth is prepared for porcelain veneers in the image. The preparation step is done so when the porcelain veneer is permanently cemented, there will be a seamless transition from where the veneer ends and the natural tooth begins.

From what you have described, it sounds like you had porcelain crowns placed on your front teeth. The preparation process for a crown is rather invasive and the tooth is ground down to a small nub. And since they keep popping off, it doesn’t sounds like your dentist really doesn’t understand how the bonding technology works for cosmetic dentistry. So, that is likely why he chose crowns.

At this point, you have limited options since your natural teeth have been prepared for crowns.

It sounds like this dentist is lacking in what we refer to as ‘proper retention form’. If a tooth is prepared properly it can be kept in place with conventional dental cement and doesn’t even require bonding technology. Since your crowns have come off repetitively, it doesn’t sound like they were done properly and have failed in how they were done from the beginning. It wouldn’t surprise me if your teeth were prepared to be shorter than required. And that in fact is where the legal issue comes up regarding a possible case for malpractice. If indeed porcelain veneers were attempted, not every dentist is trained to place them. But in regard to crowns, every dentist is taught how to prepare a tooth properly and place a crown in dental school. Therefore, the dentist has not met the standard of care for porcelain crowns and may be liable from a legal perspective. Also, since you mention that your breath smells awful before they come off means that the crowns are getting loose in function. When they become loose it allows saliva and bacteria to come in between the crown and tooth which results in the bad smell and taste.

Furthermore, you mentioned the medication. What you have described is for sedation dentistry, which most patients will not require for crowns. You didn’t mention if you deal with dental fear or anxiety. If not, this treatment should be done with Novocain alone or possibly nitrous oxide along with Novacain if you were nervous. For you to be sedated to the point you don’t remember the visit, just isn’t right. Now, on the flip side if you did request sedation, why the particular brand Ativan? This medication has a half-life of approximately 24 hours, which means half of the dose remains in your bloodstream the following day. Basically, it may be a couple days for the medication to be out of your system. Most sedation dentists will choose Halcion (triazolam), which has a serum half-life of about three hours. This means it will be out of your system shortly after the appointment. Something just doesn’t sound right about this entire situation.

OK clearly this is not your fault. But, now what? It sounds like you may be able to take legal action. Your teeth have been ground down when it is unclear if the treatment was necessary in the first place. The dentist was aware that you grind your teeth, which places additional stress on these aggressively prepared teeth. In a world that was fair, the dentist should pay for you to have the work redone by a dentist that truly understands bonding technologies and knows what they are doing. Also, the dentist should be required to compensate you for the possibility of future problems that may incur since the work was done so poorly. At this point, you may need to have a legal representative help you.

But first, it would be good to get a second opinion and get the work fixed. It sounds like it may be best to do that in your new location after you move. Then, the new dentist may be able to assist you and help confront the dentist who did this to you. Hopefully, this will be enough pressure for the dentist to make it right and it can be settled outside of court. The dentist’s malpractice insurance should kick in and cover what is needed to make it right. However, if you do end up in court, by the sounds of it, you have a strong case.

Whatever you decide, you deserve to have the teeth corrected. It is not normal to have them reapplied so frequently. Thank you for sharing your story. Hopefully, you are on the right track to getting things corrected and maybe you have helped someone in a similar situation by reaching out. Best of luck!