My front tooth has had a small chip on it for years. I had tooth bonding before and it worked well for awhile. But, over time the bonding came off. So, I fully expected my new dentist do redo it. He recommended I get a porcelain crown instead because he said the chip was too big for the bonding to work. I have had crowns before and I know how much of the tooth is removed and I didn’t want to lose anymore of my tooth. So, I asked him to do a porcelain veneer.

He tried to talk me into a crown but eventually agreed on the veneer. In hindsight, I should have realized this was a red flag!

When I went in to have the porcelain veneer placed, I was asked to choose the color. I picked a color that was a little lighter than my surrounding teeth because I have been thinking about getting my teeth whitened in the near future. So, I thought it would blend in after the whitening was done. He let me see how the shape of the tooth would look and I thought it was fine and signed the form to move forward.

The porcelain veneer was glued in place and that was it. The dentist and hygienist had me smile and told me it looked great. I didn’t get to look at it until I got to the car.

I was mortified when I finally saw it. It is longer than the tooth next to it by a millimeter. Also, the veneer appears to be sitting forward a little bit. I knew with the lighter color it would stand out. But I had no idea it would literally be sticking out. Then, on the back of the veneer there is a gap between the veneer and my tooth. It drives me crazy and my tongue will not leave it alone. It’s so bad that when I’m eating, I can actually feel the different lengths of my two front teeth.

I called in and explained my concerns and was told that there was nothing that could be done regarding the length of the porcelain veneer. However, they did sound like they can do something about the back of it. She tried to tell me that the tooth must have moved which they cannot control and that is why it looks longer. I explained that it has looked like this from the get go and I noticed it in the car after walking out of their office.

I’m overwhelmed by the whole situation. What am I supposed to do now? Is it time to get another opinion to see if it can be fixed? I feel like I’m not getting anywhere with this dentist.

Sadly, we hear about cosmetic dentistry mistakes far too often. 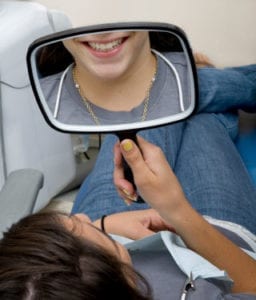 Most patients will take a dentist at their word and trust that they know what their doing. But with cosmetic dentistry, the patient needs to be aware of the difference between a general dentist and a cosmetic dentist. Most general (family) dentists are trained to fix some kind of functional problem. So, there is a good chance they haven’t received the skills or training to make it look nice too. A cosmetic dentist cares about functionality and solving problems. However, they care deeply about the esthetics of a smile. They are passionate about providing beautiful results. Think of a cosmetic dentist like an artist and a general dentist like an engineer.

It sounds like there were many things that went wrong with your case. Please understand that is always difficult to provide specific recommendations without having seen you in person. So, don’t let this discussion take the place of a second opinion.

From the information you provided, it sounds like your dentist may have been pushed out of his comfort zone. It almost sounded like you had to talk him into doing the porcelain veneer. That’s never a good idea.

The first issue with your dentist is why he was adamant about not redoing the dental bonding. The answer is likely that he isn’t experienced doing it and that is why he recommended the crown. If the bonding worked the first time for the tooth, it is reasonable to assume it would work again. You didn’t give any indication that there is more tooth missing now than there was from the original chip. So, reading between the lines, he wasn’t comfortable with it. An excellent cosmetic dentist, tooth bonding would have been a top choice for a chipped tooth.

Your instincts were correct when you disagreed with the crown recommendation. A crown is an invasive procedure and would require removal of additional tooth structure on your front tooth. So, it’s good that you didn’t get that done.

As we mentioned earlier, it sounds like your dentist wasn’t experienced in doing porcelain veneers. Dentists don’t like to admit they can’t do something. So, he may have been hoping that the lab would deliver a natural-looking veneer and you’d be on your way.

The application process is the main area where things went wrong. You mentioned that you had the opportunity to see how it was going to look, which must have meant that the color, shape and length looked fine. Otherwise, you wouldn’t have given him the green light. Everything to this point sounded routine.

Then, after the porcelain veneer was permanently cemented in place, it is strange that you weren’t allowed to see it. Most cosmetic dentists love the moment of truth. They live for that moment when you finally get to see your new smile. Since they didn’t let you see the end result, it makes you wonder if he knew there were issues. And the fact that they told you it looked great is really frustrating.

Ultimately, it sounds like the veneer wasn’t applied (seated) in the correct position with the bonding agents. Maybe it was discovered during the curing process. But at that point, it was too late. The bonding process is a lot different in seating a crown. It’s pretty obvious when the crown is positioned properly since it covers the entire tooth. It is much more difficult to place a porcelain veneer and requires extensive training beyond what is taught at dental school.

The other strange piece of your story is when you called the office and explained the problem with the length. There is absolutely something that can be done to fix the length of the veneer. It can be trimmed in most cases. The length of the veneer has nothing to do with your tooth moving. That is a non issue. Unfortunately, it sounds like the veneer will need to be redone.

An expert cosmetic dentist would be able to polish and trim the veneer without much problem. But, it doesn’t sound like your dentist knows what he’s doing. So, it would be in your best interest to ask for a refund and not have him attempt to fix anything. Hopefully, he doesn’t give you any grief and does the right thing. One thing you can do is see a reputable cosmetic dentist in your area and have them provide documentation of what he sees. Ask for images of the back of the tooth, which will clearly demonstrate how it is not seated correctly. That will give you some leverage if you end up needing it. That said, hopefully the original dentist will do the right thing. He is probably embarrassed.

Lastly, if you were entertaining the idea of whitening your teeth, that should have been done before the porcelain veneer was placed. No one wants to walk around with one super white tooth. An experienced cosmetic dentist would have done the tooth whitening first and then waited a couple weeks for the color to even out. Then, in all honestly, they would have probably had no issue with doing dental bonding on the tooth. But, if they did recommend the porcelain veneer, then it would have been the dentist recommending the correct color of the veneer so it blended in perfectly.

Thank you for sharing your story. By doing so, hopefully it will help others who may be trying to figure out if their dentist knows what their talking about.

It’s too bad you don’t live closer. Dr. Gavrilos is a cosmetic dentist located in Barrington, IL and routinely places beautiful porcelain veneers. You’ll be able to find someone in your area to help you. Good luck!