A couple years ago, I had a small chip on one of my front teeth, which was repaired with a porcelain veneer. I loved the way it looked at first. It blended in perfect and no one could tell I had any work done. However, a dark line is starting to visible right at the top of my gums.

Does this sound normal? I’m starting to hide my smile when I think about it. Also, I’m hoping there is an easy solution.

Difference Between a Porcelain Veneer and a PFM 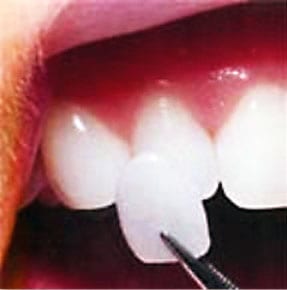 A PFM crown actually covers the entire tooth. The natural tooth is shaved down and the crown sits over top of the tooth like a cap. Generally, a crown is used when the tooth is cracked or a large chip or decay has compromised the natural tooth.

There is a metal framework that gives the PFM it’s strength. Unfortunately, as your gums begin to recede, the metal may become visible along the gums. That said, only two years since the placement of the crown sounds early for this to be taking place. Sometimes, gum disease can accelerate this process where the metal begins to show, or it could be another circumstance like brushing too hard. So, before you move forward with having the issue fixed, you’ll want to find out why this is occurring so soon.

Now, if you are absolutely positive it is a porcelain veneer, it doesn’t sound like it was done very well. There is normally a seamless transition from the natural tooth to the porcelain veneer. Again, it is possible that your porcelain veneer was placed by an inexperienced cosmetic dentist. Because in order to do beautiful porcelain veneers requires extensive training beyond dental school, as well as an artistic eye. If this is the case, it could be that the dental bonding was done poorly or that the transition wasn’t a smooth one, which may be causing bacteria and debris to build up. That could also be the cause of the dark spot.

What to Do Now

The best course of action would be to seek a second opinion by an expert cosmetic dentist. Then, you can be determine whether the discoloration is coming from poor technique by the original dentist, or a PFM. If it is indeed due poor dental bonding or a transition problem from the first dentist, he or she should fix it for you.

Now, if the original dentist doesn’t seems cooperative, you may need to move forward with a new experienced cosmetic dentist.

Thank you for your questions. Hopefully, this information is helpful as you figure out the next steps.